The High Cost of Summertime Electricity

Intuitively, it seems the demand for electricity should be highest during winter’s cold, dark days. However, it’s the summertime demand for air conditioning and the huge amount of electricity it consumes that drives up utilities’ cost of supplying electricity. Understanding what makes the costs go up can help commercial and industrial facilities reduce monthly electric bills.

Electric utilities are required to meet the prime directive:

“Supply all the electricity customers want…whenever they want it.”

This simple, but unconstrained, requirement is the principal driver of costs in the supply of electricity. It compels utilities to meet huge demands for electricity 24/7/365 without warning, without exception and without cost limitations. The cost of excess generating and delivery capability to do this is very high.

Figure 1 shows annual winter (blue) and summer (yellow) peak electricity demand and for the 48 contiguous states from 1990 to 2016. The red columns are the extra installed generating capacity, called the reserve margin, needed to meet all prime directive contingencies such as unexpected power plant outages during peak summertime demand. The dark line shows how the national average price of electricity, unsurprisingly, tracks the installed capacity.

To get a feel for the magnitude of the cost of supplying electricity, consider the smallest reserve margin shown in Figure 1, 103,800 MW in 1999. At 2018 building costs, that amount of installed generating capacity would cost $72 billion, not including transmission lines or other infrastructure. 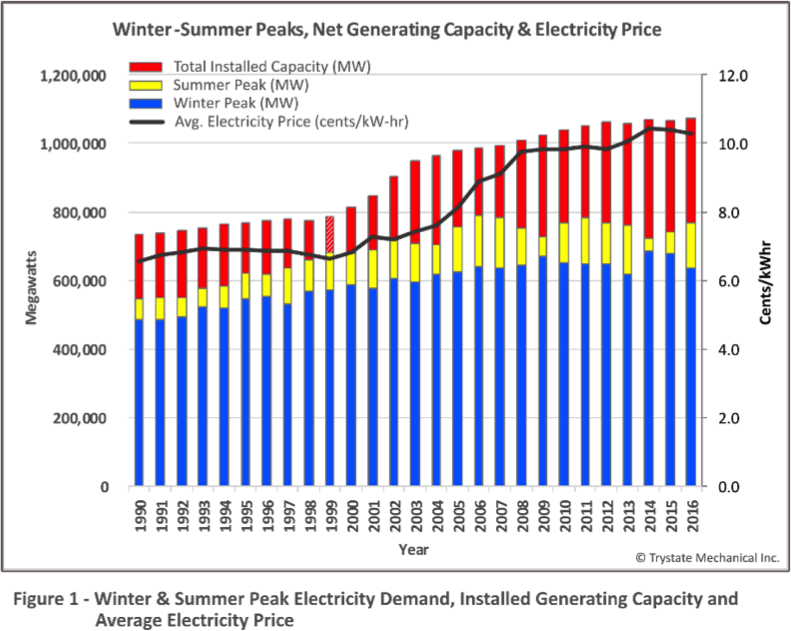 Adjusting electricity generation up and down to match daily demand variations is especially challenging in the summertime, June through September, because the peaks can be very high but also very short in duration. Table 1 shows how high and short the peak demand can be.

The annual demand for electricity in 2016 New York State arranged by demand duration is shown in Table 1. Satisfying the highest summer peak requires 28% (7,000 MW) of the generating capacity operate for 112 hours or just 1.3% of a year. That 7,000 MW equates to 90 to 120 generating plants. These plants sit idle not generating revenue most of the year but add substantially to the cost of electricity.

A daily summer electricity demand profile is shown in Figure 2. Serving the high, short duration peak load requires a special type of generating plant: a peaking plant a.k.a. “peaker”. These are the plants described above as sitting idle most of the year. Simple cycle gas turbines are commonly used as peakers because they:

On the downside, peakers have relatively high maintenance costs and high greenhouse gas emissions as well as a cost of generating electricity up to 5 times that of a base-load plant. So, the need to operate peakers adds significantly to the cost of supplying electricity.

Base-load units include nuclear and large, efficient fossil plants and are the money-makers producing electricity at the lowest $/MW-hr cost. Often taking a day or longer to start up, base-load units are most efficient at full load and are run there as long as possible once started. Intermediate or “load-following” units usually produce fewer MWs than their base-load counterparts, but they start much faster and have good efficiency across a wide range of load points. This operational flexibility makes their $/MW-hr cost slightly higher than based-load units but much better than peakers. 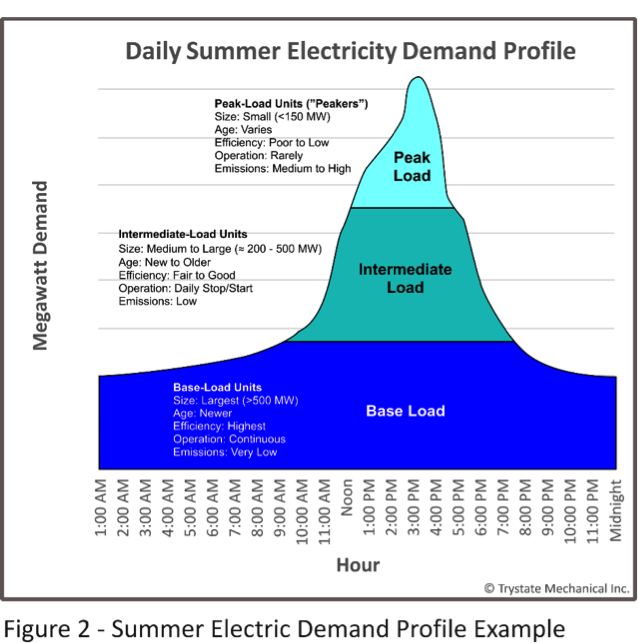 Whether new lines or upgrades, expanding transmission & distribution capacity adds to the cost of electricity.

Besides increasing demand, high summer temperatures and humidity adversely affect the performance of mechanical and electrical equipment, such as:

These reduced efficiencies and capacities line up in the same direction to drive up the cost of supplying electricity.

For commercial and industrial customers, there is good news in this. Electric utilities and Federal, state and local agencies have heavily discounted electricity rates and other financial incentives to reward customers willing to help shave (reduce) demand peaks and shift loads (to off-peak times). With new technological advances and significant incentives, it’s a great time to check out all the opportunities to save money on electric bills.

See how much you can save money on electric bills using new technologies for peak shaving and load shifting (Figure 3) by contacting your Equans MEP representative. 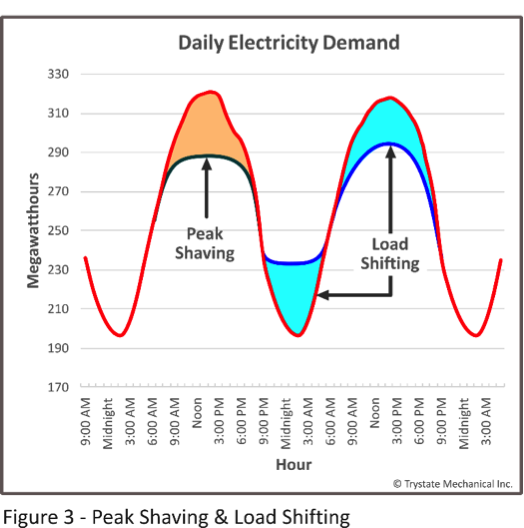