What Are Demand Charges?

In deregulated electricity markets such as the New England states (except Vermont), the electric bills of commercial and industrial consumers typically have two major portions: electricity supply and electricity delivery. The supply portion largely covers the utility’s costs of owning and operating power plants plus the cost of fuel to generate the electricity (kW-hrs) consumed. The delivery portion, often called the “demand charge”, generally covers the utility’s costs of transmission and distribution lines, substations, transformers, etc. needed to deliver electricity from power plant to consumer.

How Demand Charges Are Calculated

The modern electric demand meter continuously measures electricity consumption in kWhrs and also records kW usage at regular intervals such as every 15 minutes. The demand charge rate ($/kW) is multiplied by the highest kW usage during any interval of the billing period to produce the demand charge. Typical demand charge rates are $8 to more than $15 per kW and may vary greatly from state-to-state and between utilities in the same state.

Company A has a steady 200 kW demand over the 30-day billing period and consumes 60,000 kWhrs of electricity. Company B consumes a similar 60,000 kWhrs and has a steady demand of 190 kW except for one day where demand spikes to 490 kW during a 15-minute period. This one instant of high demand makes Company B’s demand charge more than double that of Company A.

Even worse, Company B becomes subject to a common billing feature called a “demand ratchet charge”. The ratchet charge means that Company B’s minimum demand charge will be up to 70% of the highest kW demand recorded during the preceding 11 billing periods. Even if Company B’s kW demand never goes above 100 kW, Company B will be paying up to $2,770 for most of the following year. Ratchet charge percentages vary between 50% and 70% depending on the utility, but most tend toward the higher value.

Ratchet charges vary by utility but clearly represent a significant cost for a momentary uptick in electricity usage. 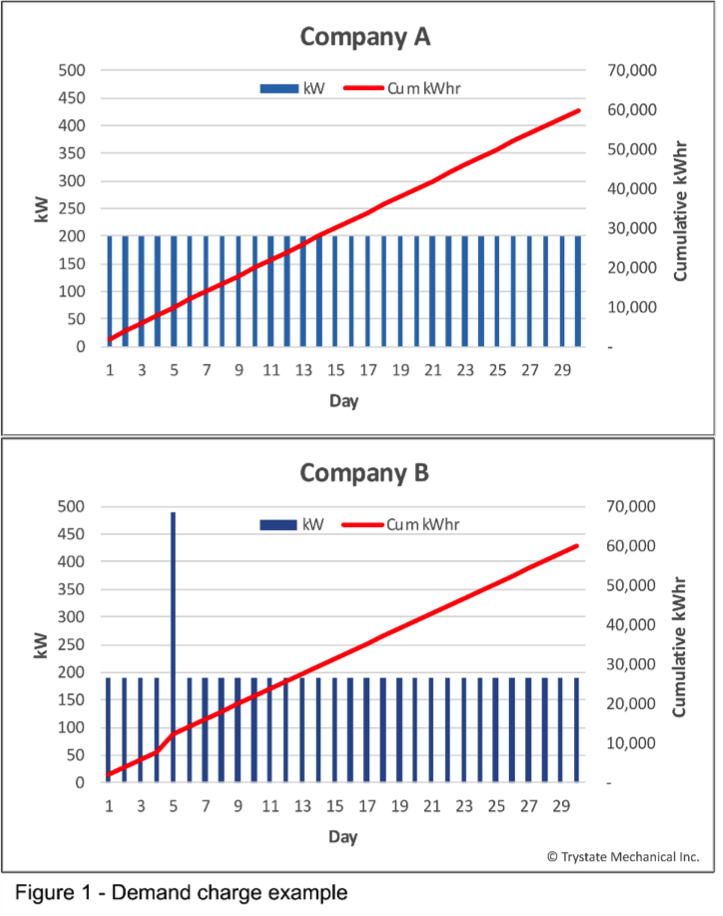 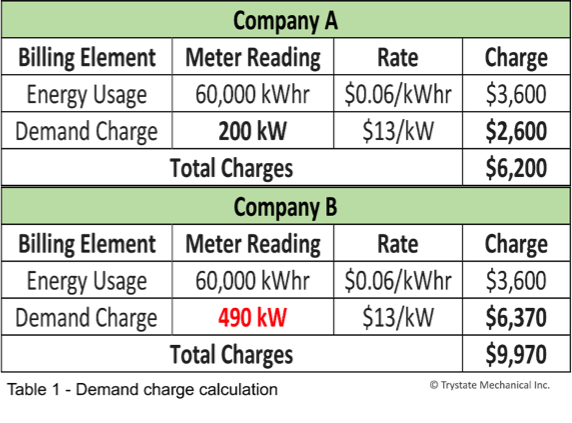 The only way to keep demand charges at a minimum is to keep kW demand in check. This can be accomplished in a variety of ways.

The most immediate, but possibly least effective, way to manage kW demand is doing it manually. Starting boilers, compressors, HVAC and other equipment simultaneous can quickly drive up kW demand. Manually staggering the startup of large electrical loads helps keep demand charges down. Similarly, deferring the operation of large loads until kW demand is low also helps minimize demand charges. However, as shown in the example above, just a few minutes of unintentional high demand can be very costly.

Using automated controls or timers is another way to manage demand charges. Such measures increase productivity, remove the human element and automate the operation of high current draw loads to minimize demand.

However, there is way to reduce demand charges below the minimum load and reduce electric bills in other ways.

Storing energy in electric batteries or in ice or water thermal systems enables kW demand to be reduced below what might be achieved by staggering or deferring the operation of equipment. As shown in Figure 2, load shifting with an energy storage system can reduce high kW demand spikes as well as minimum base kW loads.

Determination of the best type of energy storage system and its optimum capacity should include:

Equans MEP has experienced in-house teams that provide engineering, design, installation, startup and maintenance to help you save energy and energy costs. Call them to start saving energy. 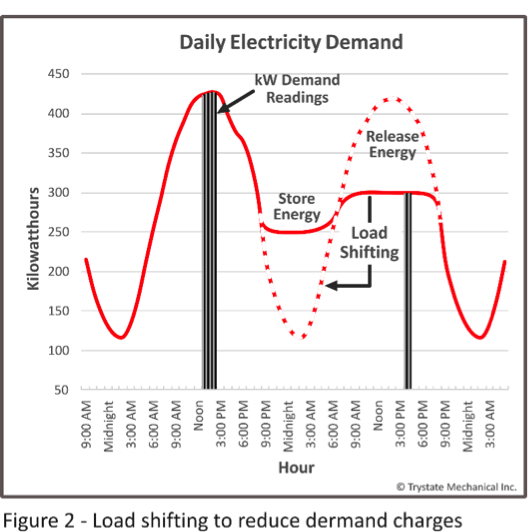