Hospitals are ideal candidates to use combined heat and power systems (CHP). Instead of buying both fuel (for making steam) and electricity, CHP allows hospitals to buy fuel (typically natural gas) to generate electricity on-site and capture the waste heat to make steam and hot water. Five great reasons for hospitals to seriously consider CHP systems are detailed below.

The efficiency of a combined heat and power system reduces hospital energy consumption between 15% and 25%, on average. Higher efficiency means less fuel which translates directly into lower energy costs. The exceptional energy efficiency of CHP systems comes largely from optimizing the capture and use of heat resulting from the production of electricity.

In 2016 New York, for example, the average natural gas was 5.60/mcf and electricity was 14.5 cents/kWh. At that rate a 3-year simple payback for installing a CHP system is possible1. After the payback, the hospital would be saving tens of thousands to millions of dollars per year on energy costs. 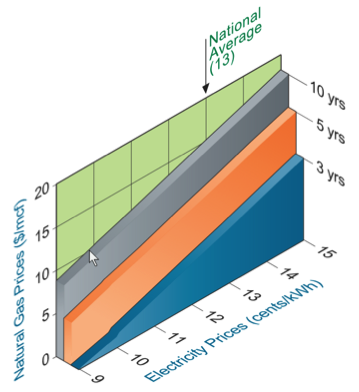 Storms Sandy, Harvey, Irma and Maria have caused national and local officials to review ways to improve energy reliability and resiliency for critical infrastructure, especially hospitals. When natural or man-made disasters cause electric outages lasting for days or weeks, hospitals and their patients are significantly impacted. Backup generators are notoriously unreliable and have fuel supplies for a few days at most. Moreover, refueling backup generators is impossible when roads are flooded or blocked and there is no electricity to pump gasoline for delivery trucks or to pump the fuel into the trucks.

CHP systems have shown to substantially increase energy reliability and resiliency for hospitals. When so designed, CHP can start (“black start”) and run with no connection to the electric grid(“islanding”). The natural gas infrastructure is often much more resilient than electric distribution networks which are susceptible to fallen trees and transformer and switchgear flooding. Because of this resiliency, CHP can provide hospitals with electricity, steam, heating and air conditioning almost indefinitely. CHP systems that run constantly are also much more reliable than backup generators that run only occasionally. Moreover, a CHP system powers most, if not all, of a hospital compared to backup generators that may power only critical services.

Depending on the circumstances, hospitals using CHP have revenue-generating opportunities, including:

Revenue opportunities can be optimized during the early project stages to maximize revenue, operational flexibility and scalability.

Generating electricity at a hospital reduces the need for large, central power plants, improves the efficiency of transmission and distribution systems by lightening electrical loads and reduces peak loads on the electric grid. Ultimately, all of these situations contribute to increased electricity generation and transmission efficiencies which means less fuel burned and fewer greenhouse gases such as CO2 and N2O being generated. Similarly, the less fuel burned results in the production of fewer pollutants such as fine particulate.

The Federal government, many state agencies and local utilities recognize CHP as a key element in achieving environmental, energy and infrastructure goals. This has lead to the creation of numerous public and public-private entities dedicated to increasing the use of CHP in the industrial and commercial sectors. Electric utilities, once a major roadblock to private electricity generation, are now incentivized themselves by states legislatures and public utility commissions to promote efficiency programs such as CHP. Incentives for installing CHP are numerous and vary by state, utility, system size, fuel and more. Financial Incentives include no-cost financial and technical support services (usually limited to feasibility stages), grants, rebates, tax credits, loans and preferential energy purchase agreements.

For those who need more convincing, following are a few more reasons hospitals should consider CHP.

Easy Project Implementation – A trend in major projects is for contractors to assume responsibility for larger roles up to and including operating and maintaining equipment or system. Beyond the scope of the traditional turnkey project, larger, multi-disciplinary contractors offer Design-Build-Operate-Maintain (DBOM) contracts to make it easier for hospitals and other healthcare facilities to utilize CHP. Delivering substantial financial savings to the hospital without the need to add management and staff, DBOM contracts can make CHP projects very attractive.

Packaged and Scalable Systems – Applications less than 1 MWe benefit from a growing number and variety of packaged CHP systems. Packaged systems simplify engineering and installation and can include integrated controls, coordinated prime mover and generator, acoustical and weather enclosures, black start capability and more. Another advantage of packaged systems is the simplicity and convenience of increasing system capacity by adding additional modules to an existing installation.

The U.S. Department of Energy’s Office of Energy Efficiency and Renewable Energy (EERE) is a good starting point for more information about combined heat and power systems for hospital and healthcare facilities. EERE has produced a fact sheet for each of the 50 states to provide an overview of the status of combined heat and power technologies, current CHP installations, technical potential and economics for CHP: https://www.energy.gov/eere/amo/state-chp-all-50-states-fact-sheet-series.

For more information about CHP for your facility, contact Equans MEP.