Air conditioning requires lots of electricity to keep things cool when temperatures go up. While there’s no practical way to cut air conditioning electrical consumption in half, there is a way to substantially cut the cost. There are even financial incentives to help commercial and industrial consumers take advantage of the lower electricity prices. What’s behind this fantastic opportunity? Ice.

Utilities are required to meet all demands for electricity, all the time. On the hottest summer days, a perfect storm of conditions drives the cost of supplying electricity to astronomical heights:

To reduce costs related to peak electricity demand, utilities offer a variety of financial incentives to customers willing to modify their electricity usage. 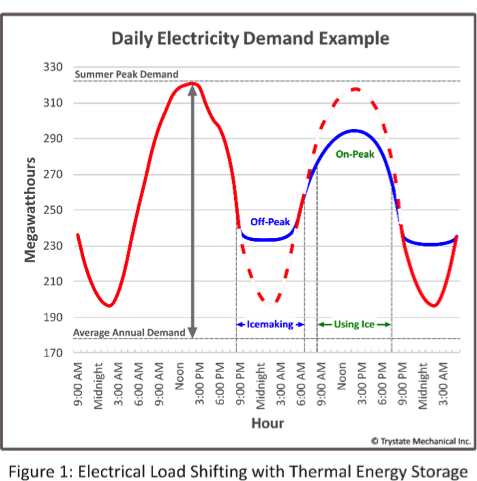 As shown in Figure 1, the peak demand for electricity (“on-peak”) occurs between 8 AM and 8 PM. To reduce the costs of meeting peak demand, utilities look for ways to shift portions of the on-peak demand to off-peak (8 PM to 8 AM) when they have idle generating capacity. A common way to effectively shift electrical loads is to store energy during off-peak times and use that energy during on-peak periods. Very large-scale batteries are being developed for this purpose, however Thermal Energy Storage (TES) systems are already a well-developed and widely used solution for load shifting.

TES systems shift electrical loads by storing energy in the form of ice to supplement the operation of chillers used in commercial air conditioning systems. To shift electricity use, a TES system runs a chiller overnight to make and store ice using off-peak electricity. Ice stored in the TES system is then used on-peak to minimize chiller operation and associated electricity consumption.

TES systems utilizing chilled water are mechanically simpler compared to ice systems. However, the primary advantage of ice TES is the latent heat of fusion (changing water to ice) which makes ice storage volume (ft3/ton-hour) roughly five times less than that of water. Needing much less working fluid, ice TES systems are small and relatively light enough to mount on rooftops while chilled water TES have very large footprints and are extremely heavy.

It isn’t unusual for on-peak TOU rates to be more than ten times higher than off-peak rates. Moreover, TOU rates vary by utility, by season, by total electricity usage and other factors but load shifting with TES is nearly always economically attractive. Reducing peak demand with load shifting is so important, many utilities and some government agencies offer grants, rebates and tax incentives to encourage commercial and industrial customers to install TES.

Demand Response (DR) programs are another way utilities reward customers helping to reduce the very highest of summer peak demands. Rather than offering cheap rates, DR programs typically pay customers who actually reduce their electricity usage for a few hours on just the 5 or 10 hottest summer afternoons. DR program participants are paid based on the number of kilowatts they drop from their normal usage when the utility asks. Large customers often defer operations, reduce lighting or raise thermostat temperatures a few degrees for a few hours to reduce their usage. However, TES enables larger reductions, larger rewards and no reduction in air conditioning.

When the utility asks for a reduction in electricity usage, the DR program participant simply brings the TES system online and reduces or turns off chiller operation to maximize kW reduction and financial rewards. DR programs are so lucrative that a growing number of customers are installing TES or adding additional TES capacity to increase their kW reduction capability and rewards.

In addition to paying for electricity consumed, many commercial and industrial businesses also pay a Demand Charge on their electric bills. Simply put, Demand Charges are a means for utilities to recover the cost of transmission, distribution and other assets. No one argues that it requires much larger conductors and transformers to supply 300 kW of electricity compared to supplying 30 kW, for example.

Utilities monitor customers’ kW usage over 15 or 30-minute intervals throughout the billing period and apply a $/kW fee to the maximum kW usage to calculate the Demand Charge for the month. It isn’t unusual for Demand Charges to account for more than 50% of an electric bill and air conditioning is a major contributor to peak kW usage. Ice TES can significantly reduce Demand Charges by minimizing the need for electricity-intensive chiller operation when all other business operations are also consuming electricity.

Start lowering your energy costs by contacting your Equans MEP representative today for a free consultation on Ice TES for your facility.