This is the first of a 2-part series. This first part examines the risks to the electricity supply and the second part will look at the options facility managers have to manage electricity-supply risks.

The North American Electric Reliability Corporation (NERC) oversees the reliability of all aspects of the bulk power system (BPS): what is commonly called “the grid”. The BPS includes the interconnected international electrical system of generation and transmission (>100 kV) plus all the utilities, infrastructure and control systems that deliver electricity to more than 334 million people in the U.S., Canada and parts of Mexico. A critical part of NERC’s oversight is an annual assessment identifying and prioritizing the risks to the reliability of the bulk power system.

Shown is NERC’s 2018 risk assessment map. The horizontal axis shows the likelihood of grid-level problems occurring and the vertical axis shows the potential severity of such problems. Arrows show the change from the 2017 assessment. Item #4 shows no arrow since its position change was due to a modification of the risk definition. 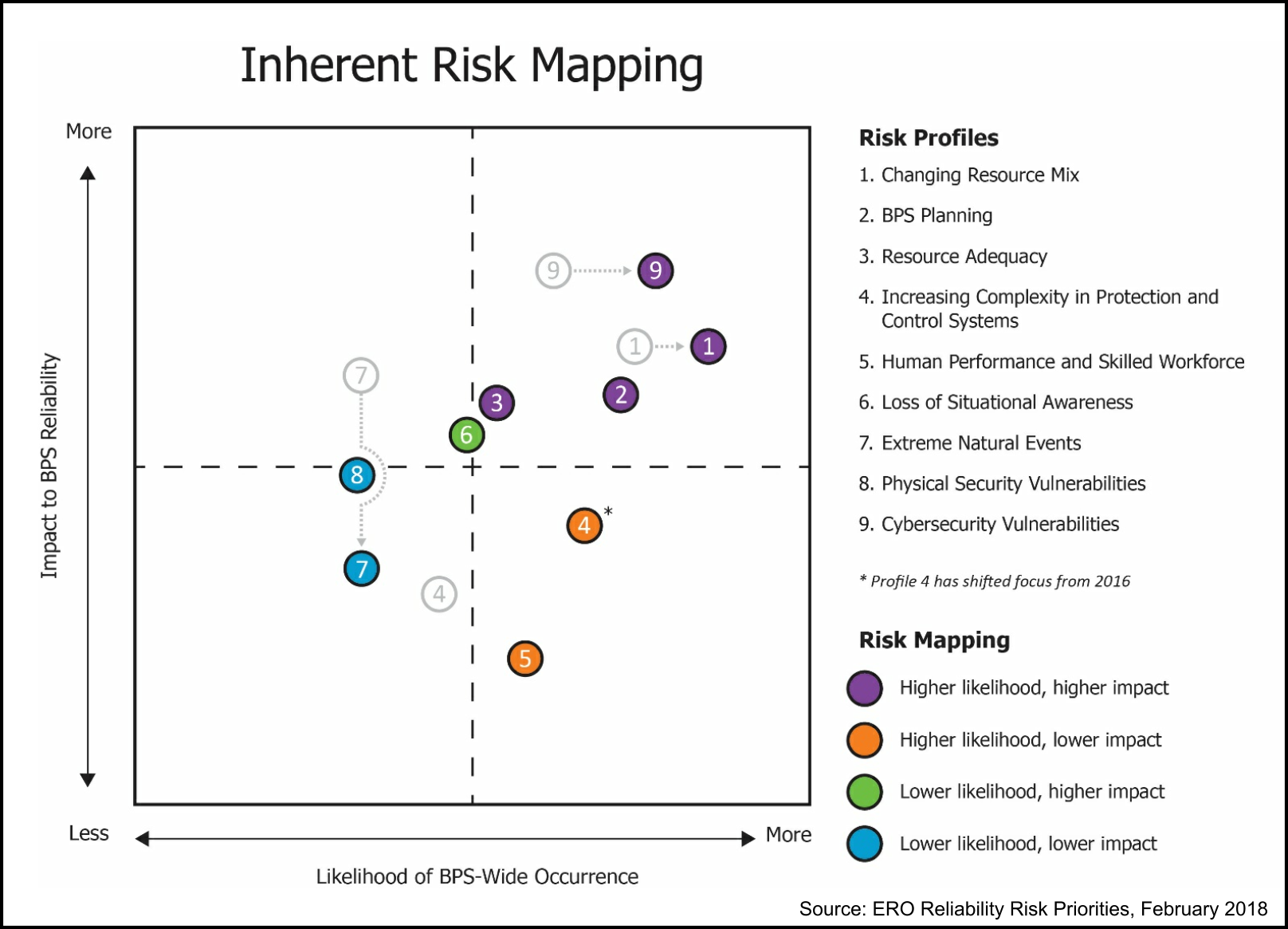 Of the highest priority issues (1,2,3 & 9), risks (1), (2) and (3) are highly interrelated with respect to rapid changes in the electric utility business model: the decentralization and changing mix of the electrical generating capacity.

The changing resource mix risk (1) has the highest likelihood of occurrence. It represents the risk presented by the shifting of electricity generation away from fossil-fueled power plants and towards renewables such as solar and wind. This risk is driven primarily by two factors:

Cybersecurity vulnerabilities (9) are just that: a bad actor attacking power plant, transmission or control systems via software and the Internet.

As noted in the Massachusetts Institute of Technology’s study for the Department of Defense, “Interdependence of the Electricity Generation System and the Natural Gas System and Implications for Energy Security:”

The natural gas network has few single points of failure that can lead to a system-wide propagating failure. There are a large number of wells, storage is relatively widespread, the transmission system can continue to operate at high pressure even with the failure of half of the compressors, and the distribution network can run unattended and without power. This is in contrast to the electricity grid, which has, by comparison, few generating points, requires oversight to balance load and demand on a tight timescale, and has a transmission and distribution network that is vulnerable to single point, cascading failures.

In addition to the advantages of the natural gas system (NGS) compared to the electricity supply sytems described, other advantages include:

Problems with electrical reliability and resiliency are very real and often impact facility operations. While NERC suggests that the risk from extreme natural events has decreased, it’s hard to overlook the electrical problems posed by hurricanes, flooding, high-wind events, wildfires and even icestorms. In addition, NERC indicates some of the more critical electricity supply risks are self-inflicted ((1), (2) & (3) above) and of increasing concern.

In second and final installment of this series, we’ll look at the options facility managers have to minimize the electricity-supply risks for facilities.