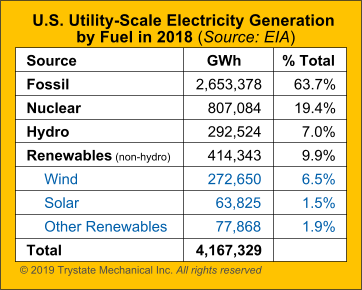 Wind. Solar. Wind. Solar. Wind. Solar. Throw in an occasional mention of battery energy storage, and you’ve identified the most common renewable energy topics people talk about today. However, wind, solar and batteries aren’t the only renewables, and there several reasons to break out of this narrow groupthink. Successful decarbonization can’t depend solely on these three technologies. We’ll explore why having a mix of renewable energy sources is so important.

Too Much of a Good Thing

The media is replete with stories of governments and utilities calling for 100% of all electricity to be generated by renewable resources by 2050 or 2045 or even 2040. Almost universally, the focus is on replacing all fossil and nuclear generation with onshore and offshore wind and solar generation and the expectation that large-scale battery storage technology will someday be available to offset the intermittency of wind and solar generation.

What hasn’t received much media coverage are 2019 reports from the Massachusetts Institute of Technology (MIT) and the international consulting firm, McKinsey & Company that suggest a variety adverse effects can result when wind and solar become more than 40% of the total electrical generating capacity.

The MIT report focused on California because of its nation-leading total of wind and solar generation and says,

“Raising the share of electricity produced by sun and wind above 40% creates at least a couple of adverse effects on the electricity system: First, more and more solar and wind production is “curtailed” — that is, the generator must be unplugged from the grid during its most productive hours because more electricity is being produced than is needed.

Second, more back-up generating capacity is needed to fill in when the wind and solar are not producing. Since that extra backup capacity is idle much of the time, it adds costs to the system.”

The McKinsey report is part of a decade-long look at Germany which is frequently held up as leader in renewable energy. Some points from a translation of the original report in German include:

Despite much hype, Germany generates just 35% of its electricity from renewables: 27% from wind, water and solar and 8% from often “dirty” biomass.

The increasing unreliability of Germany’s energy supply is due to its heavy reliance on intermittent solar and wind generation. For three days in June 2019, only electricity imports from neighboring countries averted blackouts in Germany while the price of this imported “balancing energy” has skyrocketed in price.

Renewables are causing similarly high price shocks in other parts of the world including Texas, Australia and California, and Britain and Australia have faced similar energy shortage problems while attempting to transition from conventional fossil generation to the intermittent generation from renewables.

Other Renewables to the Rescue

The accompanying table shows that there is plenty of “room” left to add wind and solar resources to the total U.S. generation mix. However, the MIT and McKinsey reports are cautionary tales about expecting intermittent wind and solar generation to be direct replacements for dispatchable (non-intermittent) fossil and nuclear generation. And, while the reports don’t explicitly say so, they help to make the case for increased diversification of renewable energy sources, especially those that are dispatchable such as the following.

“Biogas” is the generic name for the combustible gas produced when microorganisms cause the anerobic (oxygen-free) decomposition of organic materials such as agricultural, municipal (landfill), plant and food waste, manure and sewage. Municipal landfills, for example, can produce landfill biogas (LFG) for 20 years or more. The U.S. EPA reported there were more than 500 operating LFG facilities and roughly 475 more potential LFG locations, in 2019.

Hydrogen is another combustible gas that can be created by the hydrolysis (electrical breakdown) of water into hydrogen and oxygen. Hydrogen becomes an energy storage media called “green hydrogen” when it is created from otherwise unusable electricity produced by wind or solar generation. Stored green hydrogen can be used to generate electricity when wind and solar aren’t meeting the demand. The Los Angeles Department of Water and Power (LADWAP) recently announced that by 2025 it would build a first-of-its-kind 800 MW natural gas-fired plant initially using up to 30% green hydrogen and converting to 100% green hydrogen fuel by 2045.

Different percentages of renewable biogas and green hydrogen can be injected directly into the existing natural gas network for use in currently installed gas-fired equipment and dispatchable generating plants, with few or no modifications. Furthermore, recent research suggests that displacing a percentage of natural gas with renewable gases could aid in meeting greenhouse gas emissions goals more cost-effectively and efficiently than the wholesale conversion to electricity of millions of HVAC, cooking and other stationary fossil-fueled systems.

Besides being dumped in a landfill and perhaps generating landfill gas, municipal solid waste (MSW) can be burned in special waste-to-energy plants to generate steam and electricity. In 2017, 52% of U.S. MSW (otherwise known as “trash”) went to landfills, 13% was burned for energy and the balance was recycled or composted. The waste-to-energy process recovers more energy than landfill gas since 30% to 40% of MSW is made up of highly combustible plastics that won’t decompose to release LFG.

Moving water such as rivers and oceans holds huge amounts of renewable energy. While not as well developed as wind and solar, technologies that capture wave, current and tidal motion (hydrokinetics) are currently in various stages of development, testing and demonstration. Moreover, water-driven electrical generation sources are dispatchable due to the uninterrupted motion of the water.

Deep decarbonization of the electric industry requires finding ways to get past the limitations of intermittent renewable resources. More renewable and dispatchable resources will help to overcome such limitations and provide resiliency and reliability to the bulk electricity supply. Biogas, green hydrogen, waste-to-energy and hydrokinetics can all play roles in the replacement of fossil generation.

Whether it’s biogas from landfills or anaerobic digesters, fuel cells powered by green hydrogen, microgrids to tie renewable and other resources together, or other types of energy systems, let Equans MEP Services help you diversify and optimize energy and electricity sources for your building or business.