Estimates suggest that Power Quality (PQ) problems cost U.S. businesses nearly $180 billion of dollars per year. In most cases electric utilities are incapable of preventing these problems, therefore it’s up to facility managers to protect their businesses. Distributed Generation (DG) has become an increasingly attractive solution for facility PQ problems because of its reliability, cost saving potential and other advantages. The following defines DG, identifies the most common PQ problems and explains how DG is a solution to PQ problems and more.

The concept of Distributed Energy Resources (DER) has become a regular topic for any discussion of energy or electricity. When it comes to PQ problems, however, it’s important to know which of DER’s the three elements of will protect against PQ problems. Those three elements are:

Generating electricity – Distributed Generation (DG) is the process of converting energy such as wind, solar, geothermal, biomass or fossil fuel into electricity through various mechanisms.

Storing energy – Distributed Energy Storage (DES) is the storage of electrical, chemical or thermal energy until a time that its use provides maximum benefits (e.g. when electricity costs are high).

The term “Distributed” as used in DER and its elements refers to activities that take place close to the point of use, often behind the meter (BTM).

There are many PQ problems besides not having electricity. Standards such as voltage amplitude, frequency and waveform define electricity acceptable for use since substantial deviation from those standards can cause shut downs, lost production or equipment damage. Thus, Power Quality (PQ) is a measure of how well electricity meets the standards. The most common PQ problems include:

Voltage sags – Sags are caused by problems on the transmission or distribution system or by the uncontrolled startup of large loads. A transmission line contacting a tree and shorting to ground, a lightning strike or the inrush current when large AC motors or transformers start are common causes of voltage sags. Technically, a voltages sag is the voltage dropping to between 10% and 90% of nominal for more than one-half cycle (8 milliseconds). Sags can cause relays, power supplies and other digital devices to malfunction. Facilities in the U.S. experience an average of 20 to 60+ voltage sags per year, although not all sags will cause a problem. 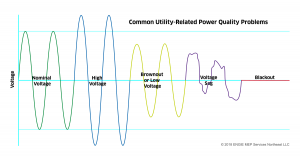 Chronic low or high voltage – Many facilities suffer chronic voltage problems: too low, too high or both. Chronic low voltage causes AC motors to run “hot” and fail prematurely. It also causes uninterruptible power supplies (UPS) to frequently cycle on and off and makes all equipment more sensitive to voltage sags. Chronic high voltage can damage digital circuitry and cause certain types of lighting to burn-out prematurely.

Voltage problems are most often caused by voltage drop in the distribution line due to impedance, heavy loads or other reasons. U.S. standards say that incoming electricity should be at a nominal voltage such as 120v or 480v plus or minus 5%. The standards, however, also say it’s okay for the incoming voltage to be within +6% to -13% of nominal for some undefined period, if the utility has a problem.

Blackouts & Brownouts – Blackouts result from the inability of the generating capacity to meet the electrical demand. Blackouts are caused by the utility cutting power to an area to reduce demand (load shedding) or a total collapse of the electrical system.

Brownouts are the result of a utility intentionally reducing the system voltage – like watering down the soup – in order to maintain generating capacity reserve margin on very hot, humid days. The difference between a brownout and chronic low voltage is that brownouts are intentional and temporary.

Reliability of electricity supply is often highlighted as a benefit of DER. Troubles transmitting and generating enough electricity are clearly the root causes of virtually all utility-related PQ problems. Hence, it is the Distributed Generation (DG) portion of DER that eliminates electricity transmission, generation and PQ problems.

Is DG for You?

Many facilities incur significant capital, maintenance and energy costs trying to protect their operations from PQ problems. Backup generators, uninterruptible power supplies (UPS) and voltage regulators are often costly, high maintenance and can operate at less than 50% efficiency. Distributed generation eliminates the need for most or all of those protective measures by generating highly reliable and cost-efficient electricity for a facility.

Distributed Generation may be a good fit for your facility, if:

Let us show you can save money, reduce risks and eliminate utility-related PQ problems with Distributed Generation. The energy and project professionals at the Equans MEP Services family of companies can help you explore your DG and DER options along with financing, financial incentives and rebates and project delivery choices.