Electric utilities are frequently under pressure from Federal and state governments to minimize the building of new electricity generating plants. Since the need for new power plants is driven by the high summer demand for electricity [link], utilities look for ways to reduce this demand. One increasingly popular technique to reduce seasonal demand is the offering of “time-of-use” or TOU rates for electricity pricing. For commercial and industrial customers, TOU rates offer an opportunity to significantly reduce their electricity costs.

Utilities set their TOU rates based on their need to reduce peak demand: the more attractive the TOU rates, the more demand will shift to off-peaks hours. Table 1 shows a relatively aggressive TOU program offered by a utility in the Northeast.

The challenge for businesses, however, is finding a way to maximize the use of off-peak electricity without disrupting necessary activities. 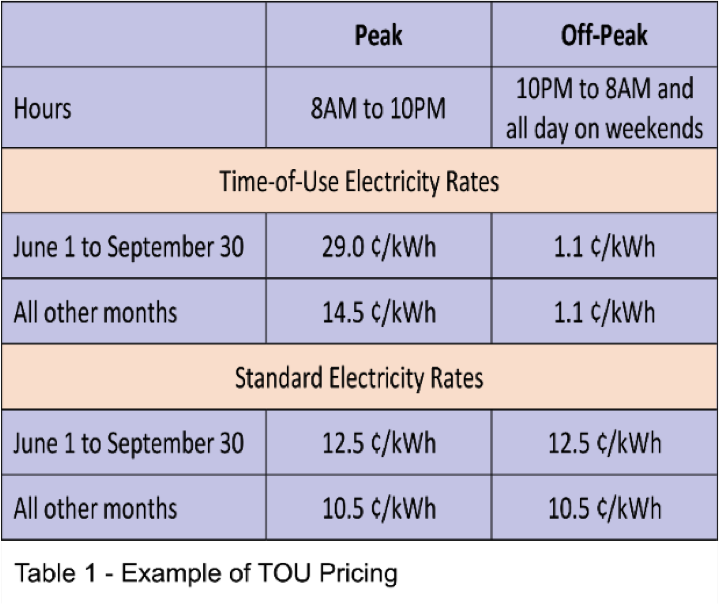 Key to saving money with TOU rates is finding a way to shift electric loads from peak to off-peak periods when the rates are much lower. While some loads such as washing, drying or cleaning may be deferred to off-peak hours, critical loads such as air conditioning or medical equipment just can’t be deferred.

The spread of the rates in Table 1 means there’s a “breakeven” point for on-peak/off-peak consumption. This is true for any TOU program. 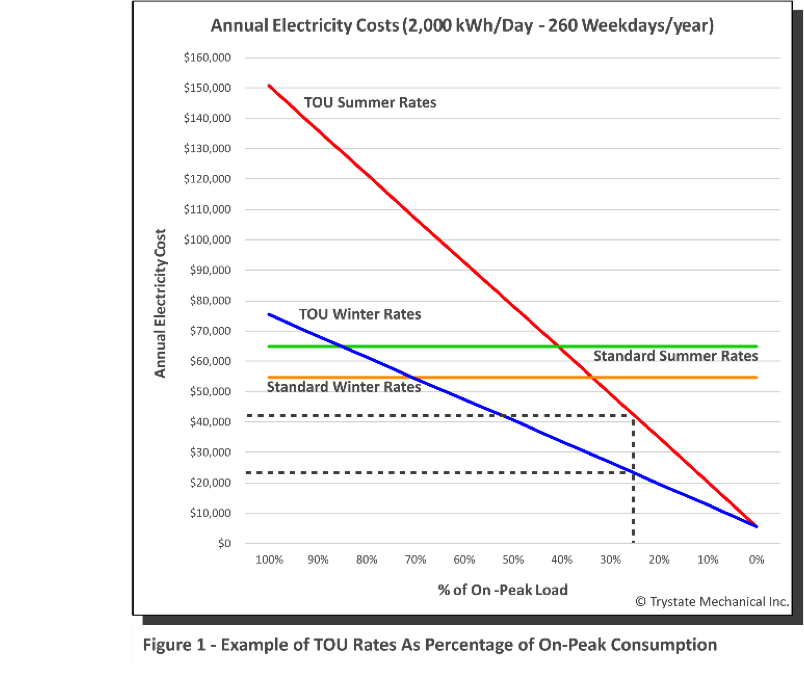 As a simple example of a breakeven point, Figure 1 represents a business consuming 2,000 kW-hours of electricity per day, five days per week, for one year using the rates from Table 1. The “summer” hours are June 1 through September 30 and the “winter” hours the balance of the year. The plot shows the annual electricity costs for the business as a function of the percentage of its total (2,000 kWh/day) on-peak electricity consumption. For the standard rates, four summer months and eight winter months result in an annual electricity cost of $59,000 regardless whether consumption is on-peak or off-peak.

The TOU rates vary significantly as the on-peak consumption goes down.

The breakeven points, as shown in Figure 1, are roughly 70% and 40% for winter and summer electricity rates, respectively. The dotted lines show an example where the business shifts its daily electric load so that 75% of consumption occurs off-peak and 25% is on-peak, for the entire year. At 25% on-peak consumption, the TOU program saves the business $29,000 or half its annual electricity cost per year. It’s easy to see that moving more consumption to off-peak hours saves additional money. Moving 100% of consumption to off-peak, the TOU program reduces the business’ electricity cost to $5,700 or 10% of the annual $59,000 standard rate.

Load shifting, moving electricity consumption from on-peak to off-peak, requires a way to supply electricity for loads during seasonal peak demand hours that does not come from the utility. The way to do this is storing energy.

Storing energy for load shifting typically entails charging a storage system during off-peak hours and using the stored energy to minimize the use of utility-supplied electricity during on-peak hours. Energy storage for commercial and industrial applications include:

There are other energy storage technologies such as capacitors and flywheels, but few can meet the high kW-hour capacities needed for load shifting large loads in the same fashion as those listed above.

And the good news continues.

As part of the Northeast’s largest power and energy company, Equans MEP has the experience and resources to help you take advantage of time-of-use rates to save substantially on your electricity costs.